We often see advertisements on Television of a person biting into an apple and seeing blood stains on it. Yes, that is exactly what bleeding from gums look like. One of the most common ailments these days and often the most neglected one also – 60% of Adult population suffers from bleeding gums. Unfortunately, 1 in 3 people think that bleeding from gums or that occasional blood that we see while brushing is normal – IT IS NOT!

We overlook our dental health and even neglect it at times until we feel pain – bleeding gums is an early indication of a more severe oral issue. While caring for your teeth is important, many people forget the value of caring for their gums as an important part of maintaining good oral health. Gums are the foundation of a healthy mouth since gums provide important support for your teeth. Bleeding gums can be a sign of gum disease.

Lots of patients ask the question on how this bleeding from the gums started suddenly? Bleeding from the gums never starts abruptly (unless there is a trauma). There is a dynamic equilibrium between Gingival bacteria and the host defense mechanism. When this balance tilts (mostly due to poor oral hygiene) bleeding starts.

1) Gingivitis – Inflammation of the gingiva (gums) caused due to build-up of plaque at the gum line. When the condition worsens this gingivitis progresses to Periodontitis.

2) Periodontitis – When inflammation involves not just the gums but also the periodontal ligaments and alveolar bone leading to its resorption and the associated loosening or mobility of teeth.

3) Trauma – accident of injury to the gum tissues.

6) Oral cysts and Tumours are also known to induce bleeding from the gums.

1) Stress – Any stress, be it physical, emotional or psychological.

3) Sleep Deprivation – under 6 hours of sleep.

7) Some medications like warfarin and dilantin cause excessive bleeding from gums.

Here are some oral hygiene tips that will help you keep your entire mouth healthier and help prevent or reduce gum bleeding. However, it is advised to see your dentist at the first sign of bleeding gums. He will evaluate your condition and prescribe the best treatment for your case.

Some Simple Steps to Prevent or Improve Bleeding Gums:

1) Brushing –When Bleeding from Gums occurs due to poor oral hygiene, the resumption of proper brushing and flossing routine can show a marked improvement.

4) Visiting your dentist every 6 months – so that early signs of gingivitis can be detected and properly dealt with.

5) In case bleeding from the gums is due to any of the above-mentioned systemic factors, a consultation with your physician is advised.

Bleeding gums are a warning and a sign of imbalance in the oral cavity. The Key is to restore the balance. We at Sree Venkateswara Dental Clinics, firmly endorse the age old saying healthy mouth equals healthy body. So, take good care of your gums and if you notice any bleeding – take action.

Clenching or grinding of teeth known as Bruxism is a form of parasomnia, clinically defined as “Continued and rhythmic contraction of masticatory muscles combined with tooth contact”. In simpler terms if you have this condition you grind, gnash or clench your teeth unconsciously when you’re awake or during sleep. Bruxism is seen mostly during night time (sleep bruxism). In rare cases Bruxism occurs during day (awake bruxism) as well as night, this sort of bruxism is known as Bruxomania.

Mild bruxism is common and may not require treatment. However, in people where bruxism is frequent and severe enough, it can to lead to jaw disorders, headaches, damaged teeth and other problems.

This is even more alarming because you may have sleep bruxism and be completely unaware of it until some complications develop especially in children. That is why it is important to know the signs and symptoms of bruxism, the causes and to seek regular dental care.

According to statistics, 50 to 85% of population has experienced bruxism at some part of their life. Bruxism is a family trait – meaning among 20 to 45% people having bruxism, some other members in the family are also suffering from it.

Unfortunately, very few people even realize that they are clenching their teeth at night, in most cases Bruxism is noticed by their spouses or other family members.

1) A Lot of people complain of a mild headache and even earache especially in the morning.

2) Having a random facial pain especially in the jaw.

3) Teeth get severely worn out (especially the molars).

4) Receding gums in people who otherwise might not show any symptoms of gum disease (Gingivitis).

5) Some medications like anti-psychotics and anti-depressants may also cause bruxism. Most common ones are Serta (Zoloft) and Prozac (Flouxetine).

Bruxism is highly treatable once the underlying cause is determined. Elimination of the causative factors in most cases completely cures bruxism.

AT HOME REMEDIES/ SELF HELP FOR BRUXISM:

1) Have lots of fluids, water is the best.

2) Use ice pack (cold fermentation) if jaw muscles are sore.

4) Hard candies, nuts, etc that are hard to chew must be avoided.

6) Relax the facial muscles – self massage is beneficial.

HELP BY SPECIALIST FOR TREATING BRUXISM

1) If the underlying cause is found out to be emotional like anxiety or fear then some professional help/ counselor should be consulted. In case of sleep disorders, a physician can also be consulted.

2) Medications – the efficacy of medications against Bruxism is rather questionable, with no concrete proof of their benefits. Though a few researchers advocate the use of muscle relaxant, even Botox to reduce the adverse effects of Bruxism.

3) Mouth Guard or Splint – Mouth Guard can be prepared by the Dentist that covers the surface of the teeth to prevent the teeth from coming into direct contact with each other during the clenching episode. A new type pf splint called the NTI–tss is rather popular these days. This splint covers the front teeth of both the upper and lower jaw, so the molars of both the jaws are always separated hence reducing the contact between the teeth during the clenching episode. The main purpose of the mouth guard is to protect and limit the extent of bruxism related injuries to the lips, tongue, cheeks and finally the teeth.

4) Crowns and Bridges – In extreme cases, when patients suffering from Bruxism consult a specialist very late, either because of late diagnosis or the patient’s fear of treatment, a lot of damage to oral tissues has already been done. The teeth maybe severely worn down and may even have fracture lines that may be causing severe sensitivity and inability to eat regular food. In cases like these after understanding the underlying cause for Bruxism and going by the severity of the condition, crowns and bridges maybe recommended to the patients. In many cases, all the existing teeth are crowned to offer respite from sensitivity and allow the patients’ to eat regular food items and resume with their daily life.

At Sree Venkateswara Dental Clinics, we have always advocated that in cases of Bruxism, early diagnosis and help from a specialist is beneficial in preventing long term and permanent damage to teeth and oral tissues.

For many years Warm Saline Gargles (W.S.G.) have been advocated by dentists all over the world as a simple yet effective tool for maintaining good oral health. Doing gargles by adding a pinch of salt mixed in a glass (200 ml) of warm water everyday aids in maintaining a healthy mouth and also soothes the throat and reduces upper respiratory tract infection owing to the antibacterial properties of salt. Although the advancement in Dentistry has been unprecedented over the last few years, yet Warm Saline Gargles have retained its importance due to its convenience and the long list of benefits. In today’s times when a majority of mouth washes have alcohol as high as 20% in them, proven to be a primary factor leading to increase in oral cancer cases, warm salt water gargles are ever more relevant.

Read below for 6 Benefits of this Do-it-at-Home Miracle Oral Health Routine:

At Sree Venkateswara Dental Clinics, in our experience we have seen the benefits of Warm Saline Gargles and hence have been advising our patients to do W.S.G. at least once before bedtime everyday for the last 40 years.

If you are a diabetic or have a history of diabetes in the family – you might want to read this!

For long, diabetes was considered a “rich old man’s disease”, well in today’s times none of these key words hold true. Diabetes is no longer limited to just the ‘old’ nor the ‘rich’ living an affluent and sedentary lifestyle, as even people in their 30’s are being diagnosed with diabetes these days. The number of diabetics both diagnosed and un-diagnosed is growing at an alarming rate. T

hough the initial symptoms like excessive thirst, excessive urination, weight loss and tiredness and later medical manifestations like retinopathy, kidney failure, nerve disorders, etc. are well known, there are various major oral manifestations and dental problems associated with diabetes that are not well known nor are they fully understood. 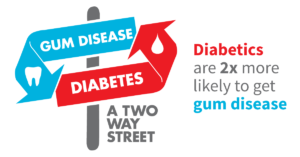 Diabetic patients are always more prone to gum diseases like Gingivitis and Gingival Recession and gum infections like Periodontitis and Abscess Formation as compared to patients without diabetes. They are also more prone to secondary infections during the course of the treatment. Even the prognosis a

nd the result are not as favourable as a non-diabetic patient. And as the gingival condition deteriorates, the gums start receding and forming small gaps (periodontal pockets) that provide a safe haven to micro-organisms and creates areas where food particles get accumulated. This leads to further damage to the gums and also increases the risk of proximal (interdental) cavities. 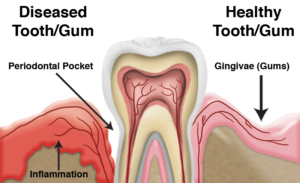 Even the Dental and Oral Treatment modalities are rather different for people suffering from diabetes; and a bit handicapped if we may add. As pointed out, the prognosis (direction of the final outcome) is different and the risk of secondary infection is also higher. Extraction if needed needs to be planned very carefully due to the risk of potential Dry Socket Formation (infection of the bone at the extraction site). Implants need to be inserted as Atraumatic to the bone as possible and periodically monitored due to increased risk of Peri-Implantitis (Infection at the Implant site).

The age old saying “Prevention is better than cure” could not be more apt in this case. Diabetic patients can lead a normal healthy life if they are a bit careful in their approach towards maintaining oral hygiene and ensure timely dental check-ups.

Some important pointers for preventing oral or dental problems in diabetic patients are:

Remember, a little timely intervention can not only help you lead a quality life but also save you from a lot of trouble, pain and expense later.

6 Reasons Why Warm Saline Gargles are a Must for Good Oral Health!

6 Reasons Why Warm Saline Gargles are a Must for Good Oral Health!